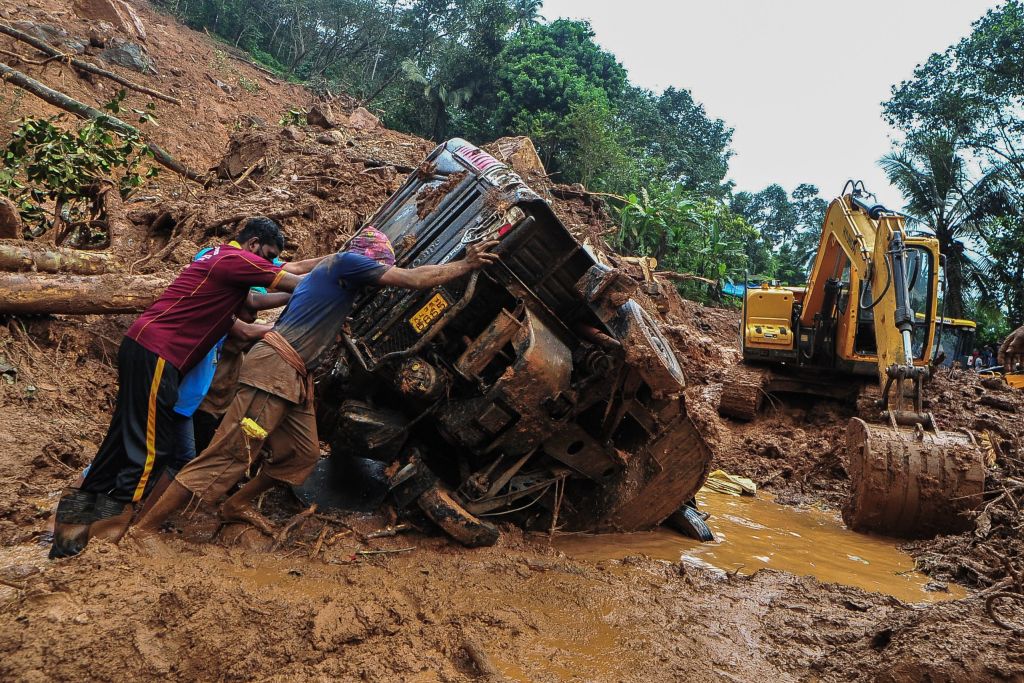 Rescue workers push an overturned vehicle stuck in the mud at a site of a landslide claimed in the southern Indian state of Kerala state on October 17, 2021. (Photo by -/AFP via Getty Images)

AT least 25 people were killed in landslides and floods caused by heavy rain in the southern Indian state of Kerala, official sources on Sunday (17) said as rescue personnel looked for survivors in muddy debris and the armed forces flew in emergency materials.

Residents were isolated in parts of Kerala as the rain, which started getting heavier from late Friday (15), swelled rivers and left the roads inundated.

Eleven bodies were recovered from the state’s Idukki district while another 14 were found in Kottayam district, officials told AFP, after heavy landslides and flash floods hit the areas.

Thousands of people were evacuated while at least 100 relief camps were set up, Kerala chief minister Pinarayi Vijayan said on Sunday. All three wings of the Indian Army were assisting with flood relief and rescue operations. Several people were still missing and the officials were yet in no position to give an estimate, AFP added.

Indian home minister Amit Shah promised all possible help to the people of the state who have been badly hit by the natural disaster.

People were found ruing the wanton destruction caused by the floods that left them without shelter. Many families lost their near ones. Video shared on social media showed buses and cars submerged in floodwaters.

Indian prime minister Narendra Modi condoled the deaths in a tweet in Malayalam and said authorities were working to help those who were hit by the deluge. In another tweet, he said he has spoken to Vijayan and prayed for safety of all.

The Indian Meteorological Department gave some relief saying the heavy rain, caused by a low-pressure area over the southeastern Arabian Sea and Kerala, was expected to ease on Monday (18).

There was little respite for northern India as some Himalayan states like Uttarakhand and Uttaranchal were expected to experience “heavy to very heavy rainfall” in the next two to three days, the weather department cautioned.

The deterioration in the weather in the northern parts would be caused as a result of a low-pressure area over Afghanistan and its surroundings interacting with strong winds from the Bay of Bengal area, the department said. The eastern Indian states of West Bengal, Jharkhand, Bihar and Odisha were witnessing rain.

In 2018, nearly 500 people were killed in Kerala when it was devastated by the worst floods in almost a century.