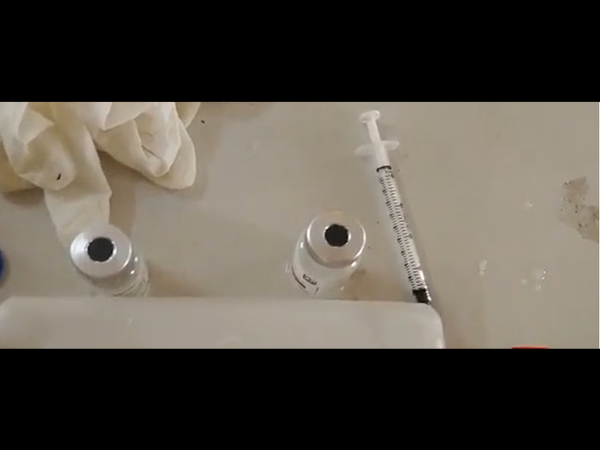 A MAN in the central Indian state of Madhya Pradesh has found himself in the soup after giving vaccines to as many as 30 students with a single syringe. However, when he was asked about his act, he counter asked saying he was not at fault as he just did what he was asked to.

The incident happened during a Covid-19 vaccination camp held for school children at Jain Public Higher Secondary School in Sagar city, Madhya Pradesh, on Wednesday (27). The parents raised an alarm seeing that all children were inoculated with a single syringe.

Jitendra, the vaccinator, claimed that he was provided with a sole syringe by the authorities and asked by the “head of department” to vaccinate all the children with it, NDTV reported. When the parents of the vaccinated kids confronted the man, he said he did not know the official’s name.

“The person who delivered the materials only gave a single syringe,” Jitendra is heard saying in a video which was recorded by the worried parents.

Shocking violation of “One needle, one syringe, only one time” protocol in #COVID19 #vaccination, in Sagar a vaccinator vaccinated 30 school children with a single syringe at Jain Public Higher Secondary School @ndtv @ndtvindia pic.twitter.com/d6xekYQSfX

When he was asked whether he knew that he should not use one syringe to inject multiple people, Jitendra said, “I know that. Which is why I asked them if I have to use just one syringe and they said ‘yes’. How is this my fault? I did what I was asked to do.”

Disposable syringes, meant for one-time use, have been around since the 1990s as a caution against spreading of HIV.

The district administration filed a first information report against Jitendra for violating the Indian government’s ‘one needle, one syringe, one time’ pledge.

A departmental inquiry was also launched against Dr Rakesh Roshan, the district immunization officer who was in charge of sending the vaccine and other materials the same morning.

The chief medical health officer of Sagar was also asked to conduct an inspection though Jitendra was not present when it happened, the NDTV report added.