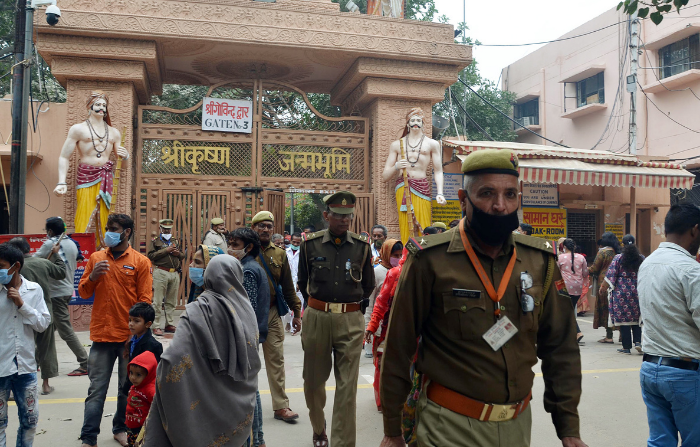 Police personnel patrol the premises of Sri Krishna Janambhoomi temple as Akhil Bharat Hindu Mahasabha announced the installation of an idol of Lord Krishna at the Shahi Idgah mosque ahead of the anniversary of Babri Masjid demolition in Mathura in Uttar Pradesh, India, on December 5, 2021. (ANI Photo)

RESIDENTS of Mathura in the northern Indian state of Uttar Pradesh on Monday (6) woke up to see their city turning into a fortress, especially the areas around the holy town’s most iconic landmark – the birthplace of Lord Krishna. The local administration tightened the security under the supervision of the state government after a few right-wing outfits threatened to install an idol of Lord Krishna in an adjacent mosque the same day which also marks the 29th anniversary of the demolition of the Babri Mosque in Ayodhya in the same state.

Some Muslim groups also decided to observe the anniversary of one of the most sensational events in political history of India to raise the concern, leaving the administration extra cautious.

According to a report by India Today, the police set up a three-layered security ring around the Katra Keshav Dev area, where Lord Krishna’s birthplace is located, and which rubs shoulders in a dispute with the mosque – the Shahi Idgah Mosque.

Historically, Mathura has not witnessed any threat to communal harmony in several decades, unlike Ayodhya, which is home to the Ram Janmabhoomi-Babri Masjid dispute, and that makes the security cordon unprecedented. Besides the security layers, every road connecting Mathura town to the national and state highways has police barricades and a narrow-gauge railway track which runs behind the temple and mosque premises has been closed due to the situation. Also, prohibitory orders have been issued against people’s assembly at places. CCTVs and police drones are monitoring the entire temple complex.

The right-wing outfits — Akhil Bharat Hindu Mahasabha, Srikrishna Janmabhumi Nirman Nyas, Narayani Sena and the Srikrishna Mukti Dal – have sought permission to instal an idol of Laddu Gopal (infant Lord Krishna) inside the mosque in December following Hindu rituals saying the site of the mosque is the deity’s “actual birthplace”.

“The police have worked overtime to ensure that peace and tranquil in the temple town is maintained. All the organisations that gave the call have backed down. Police and paramilitary forces are in place to block any attempts. We have spoken to elders and religious heads on both sides. The message from Lucknow is to display zero tolerance to trouble makers,” Mathura senior superintendent of police (SSP) Gaurav Grover told India Today TV.

The Uttar Pradesh Police arrested Chhaya Gautam, the Mathura district president of the Hindu Mahasabha, and Rishi Bharadwaj, the group’s Mathura leader, on December 4 to neutralise the threats.

The Muslim groups, on the other hand, have also been left worried over a Twitter post by Uttar Pradesh deputy chief minister Keshav Prasad Maurya on December 1, “Ayodhya Kashi bhavya mandir nirmaan jaari hai, Mathura ki taiyaari hai (construction of grand temples in Ayodhya and Kashi are underway, preparations for Mathura is also on).”

In view of the right-wing groups’ threats and the minister’s tweet, some Muslim groups decided to observe the Babri demolition anniversary to highlight their concern. They approached the district administration of Mathura and expressed apprehension that the Hindu outfits’ action may fuel communal tension in large parts of UP, the most populous state of India which is also known for its social divisions.