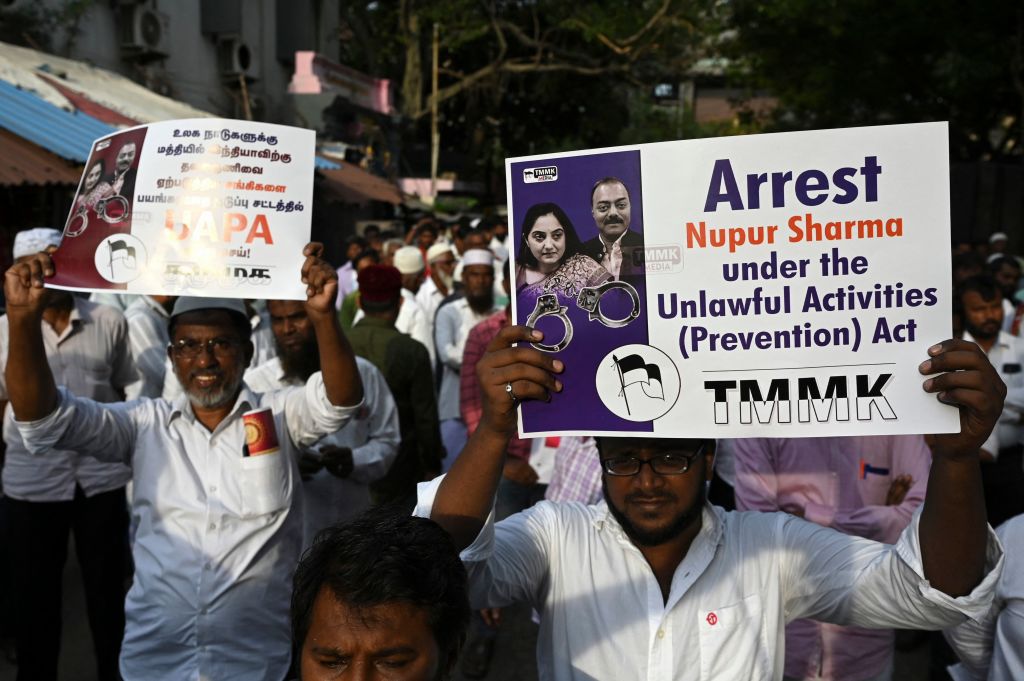 Activists of the the Muslim non-governmental organisation Tamilnadu Muslim Munnetra Kazhagam (TMMK) hold placards during a protest against India’s Bharatiya Janata Party former spokeswoman Nupur Sharma over her remarks on the Prophet Mohammed, in Chennai on June 10, 2022. (Photo by Arun SANKAR / AFP) (Photo by ARUN SANKAR/AFP via Getty Images)

A MAN from Pakistan was held on the Indian side of the border for allegedly plotting to kill Nupur Sharma, a now suspended leader of the ruling Bharatiya Janata Party (BJP) for making controversial remarks on Prophet Muhammad on a television debate in May.

Anand Sharma, the superintendent of police of Sriganganagar in the western Indian state of Rajasthan border Pakistan, told the media that the accused was identified as Rizwan Ashraf and the 24-year-old hails from Kuthiyal Shaikh in Pakistan. Two knives, one big and small, were recovered from his bag along with other essentials such as clothes and food besides some religious books.

Pakistani national Rizwan Ashraf who crossed over to India to allegedly kill #NupurSharma
has been held in Sri Ganga Nagar district of  Rajasthan.#BSF has recovered 11-inch long knife from Rizwan.

A joint team of the intelligence agencies are interrogating. pic.twitter.com/UByS6kuH0q

“He said he came to India to take action against Nupur Sharma on her statements. He had no idea where she lives, he was only so religiously motivated that he crossed over,” Sharma was quoted as saying by reports. He though did not say who motivated Ashraf to come to India and fulfil the mission.

Before you get all misty and grateful with the #SupremeCourtOfIndia giving #NupurSharma interim relief, don’t forget that this Pakistani came to India to kiII her coz the supreme lords had blamed her for everything! pic.twitter.com/RaUQVmvbmf

Ashraf was taken to five days of remand and a joint team of intelligence agencies was interrogated him.

Indian journalist Manish Shukla said in a tweet, “Rizwan Ashraf is a strong believer of Islam. His educational Qualification is Class 8th (till 5th from local school and from Madarsa till 8th).”

‘Could not afford a pistol’

Twitter was amused by the fact that the accused Pakistani national could not afford a gun to carry out his mission and had to depend on a knife.

Here is how they reacted:

The terrorist Rizwan who came from Pakistan to attack #NupurSharma, is so poor that he could not afford even a Pistol.
He was carrying an 11 Inch long knife to K!ll नूपुर शर्मा.
Fortunately, has been detained by #BSF on #SriGangaNagar border.#ProphetMuhammad Muslim PM #AlertBSF pic.twitter.com/VoQSMGLXcT

Very poor Terrorist of Pakistan who could not even afford a Pistol 🤣
He was carrying a 11 inch long knife to K!ll #NupurSharma but got nabbed by #BSF on #SriGangaNagar Border.
This is the condition of Muslim PM supporters 💔#AlertBSF #GuluGulu #ProphetMuhammad pic.twitter.com/p9WdXHhRom

This time #Pakistan sends a trained #Jihadi to behead BJP leader #NupurSharma for her statement over #ProphetMuhammad, but this [email protected] caught by #BSF troopers from #SriGangaNagar border.