Struggle For Water Intensifies In India 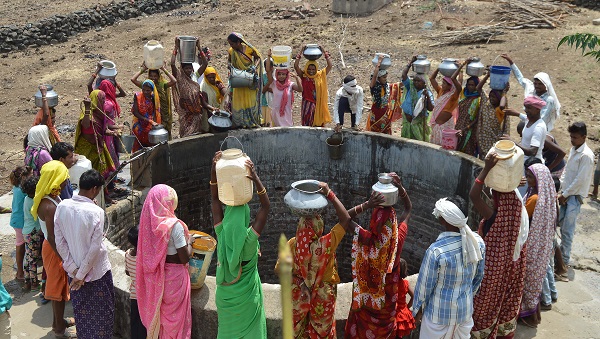 RESIDENTS of the drought-hit Indian village of Salegaon are so desperate for water they have started lining up their pots two days before the tanker is due to arrive.

When it does, the neatly lined up pots go flying as the villagers rush forward. Usually only about half get water, leaving the rest to make the two-mile (three-km) journey to the nearest well

Salegaon is in Beed district in western Maharashtra state, home to India’s bustling commercial capital Mumbai, but also to vast tracts of farmland battling years of drought – a double whammy for the villagers, who depend on agriculture for work.

“There is no rain, so there is no work on farmlands, and no money,” said 19-year-old Ashwini Galphade, who moved to Salegaon village after marrying last year, covering her head with a scarf to protect herself from the noon sun. “How can we afford water?”

Beed is among eight districts in Maharashtra’s Marathwada region, where poor rainfall has ravaged crops, dried up reservoirs and forced people to migrate from their villages.

Many have gone to work farming sugar cane – a thirsty crop that accounts for 4% of agriculture in Maharashtra, but devours two-thirds of its irrigation water, exacerbating the problem.

The struggle for water has intensified in many parts of India, where villages and cities have run out of water – a problem campaigners have said is due as much to years of poor groundwater management as to a lack of rain.

“Over 60 per cent of nearly 17,000 groundwater wells monitored to check ground water level showed a decline compared to the average level of the last 10 years,” said Kishore Chandra Naik, chairman of India’s Central Ground Water Board.

“The decline is because of extraction, whatever may be the purpose for it,” Naik said, warning some wells would eventually dry up.

India faces the worst long-term water crisis in its history as demand outstrips supply, with millions of lives and livelihoods at risk, the government think-tank Niti Aayog warned last year.

Chennai was one of 21 cities the think-tank said could run out of ground water by 2020 and this week, taps ran dry as water levels in its four major reservoirs fell to one-hundredth of what they were this time last year.

The crisis in the southern coastal city has pushed schools, hotels and commercial establishments to close, while hospitals have put off non-essential surgeries.

The Madras High Court on Tuesday demanded to know why the state government had not worked through the year to avoid it. “Don’t blame the hand of God, what did the hand of the man do?” the court said.

“We use more groundwater than what China and the United States collectively use. Countries like the US identify and protect their groundwater recharge zones. What have we done?” Thakkar said.

The crisis has hit rural and urban Indians alike.

On the outskirts of Marathwada’s Aurangabad city, children as young as 10 were being sent to fetch water a train ride away, hauling back containers of water almost as big as they were.

“I feel scared travelling on the train. People also stop us from filling water at the train station,” Siddharth Rahul Dhage, 10 and small for his age, told at the station as he balanced a 20-litre (35-pint) water can.

“I don’t like doing this, but my mother says we have no choice.”

With the men away, the back-breaking work of fetching water is mostly left to women and children.

But help is a hand after a charity in Salegaon came up with the idea of handing out “water wheels” – wheel shaped containers that can be rolled rather than carried, with bright yellow handles for steering.

“We fetch water in the morning and evening and carry three pots of water on our heads. Our husbands have no time as they look for work on the farmland,” said Geeta Kailash Dalpade, 26.

“But this (water wheel) can carry 45 litres of water. Our backs hurt all the time and this could help.”