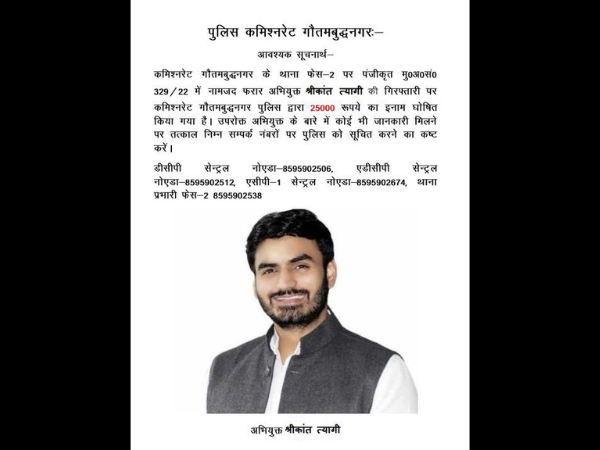 Noida Police has announced 25000 reward on the arrest of goon Shrikant Tyagi who was the on the run (Picture: Twitter account of Aditya Raj Kaul)

Absconding Indian politician Shrikant Tyagi, who was recently seen abusing and assaulting a woman at his housing society in Noida in the northern state of Uttar Pradesh, was arrested Tuesday (9) from Meerut, officials said.

Tyagi, who was at large since Friday (5) evening, had moved a court in the Gautam Buddh Nagar district with a plea for surrender-related procedures.

The hearing in the matter has been listed for Wednesday (10).

Until he went underground Friday night, Tyagi claimed he was associated with the state’s ruling Bharatiya Janata Party (BJP), even as it denied any links with him.

The Opposition has also mounted attack on the BJP over the issue.

Tyagi had allegedly hurled expletives and assaulted the woman co-resident of the Grand Omaxe society who had objected to him planting trees in the common area. Tyagi had claimed that he was well within his rights to do so.

On Monday, local authorities brought a bulldozer to demolish Tyagi’s properties in the society as the residents cheered. the state’s chief minister, Yogi Adityanath, who is known for his tough administrative image, took special interest in the case to ensure that stern action was taken against the accused.