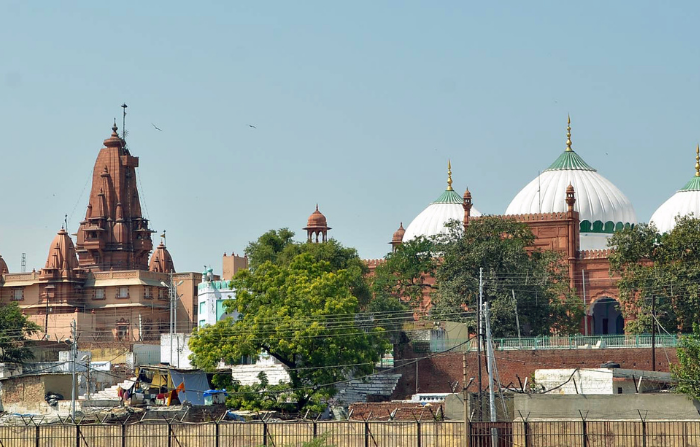 The temple and mosque which have stood side by side over decades but became a source of a major religious row in Mathura in the northern Indian state of Uttar Pradesh ahead of the upcoming state elections. (ANI Photo)

WITH Uttar Pradesh, India’s largest state and also the most important one politically, set to go to elections starting in February, religious polarisation is on the rise.

In Mathura, a religious city where a Hindu temple and a Muslim mosque are located side by side, some Muslim eateries have been found to be either mostly empty or closed, a Reuters report said.

Last year, Uttar Pradesh’s Bharatiya Janata Party (BJP) government imposed a ban on meat which has impacted the minority community’s trade. The chief minister, Yogi Adityanath, who is a Hindu monk, has also vowed recently to champion the Hindu cause in a long dispute with Muslims over who owns the site where the temple and mosque are located.

The issue has emerged as a key one as part of the Hindu nationalist BJP’s campaign to extend its government’s tenure in the state, where 200 million people reside. The results of Uttar Pradesh elections are also considered significant as whoever controls the state has a good chance of returning to power in New Delhi since the big state sends as many 80 lawmakers to the Indian parliament.

Hindus and Muslims have fought over controlling the site for decades and now with the temple getting support from the Hindutva voices, Mathura’s Muslims feel worried, Reuters said after speaking with more than 20 residents of the city.

The dispute in Mathura is getting frequent mention at campaign rallies and social media, adding fuel to an already polarised milieu ahead of the seven-phase elections starting on February 10.

“An old case which has been settled … is being revived because we have a new, triumphalist Hinduism,” Nilanjan Mukhopadhyay, author of several books on prime minister Narendra Modi and the Hindu nationalist movement, told Reuters.

“There is a greater emphasis on playing the temple card,” he added.

Opinion polls suggest that Adityanath will return to power in Uttar Pradesh, the state that the BJP swept in the 2017 elections, despite discontent over the economy and the government’s handling of the devastating phase of the coronavirus pandemic.

Adityanath, who is seen by many as a potential successor to Modi on the national stage, has called the upcoming ballot as “80 per cent versus 20 per cent”, figures that he did not explain in full. The percentages, however, closely match the Hindu and Muslim share of the population across Uttar Pradesh.

The BJP won power in the state on a Hindu-first agenda five years ago and did not field a single candidate from the Muslim community. The victory reiterated the saffron party’s dominance nationally since Modi stormed to power in New Delhi in 2014. The party is now aiming for another 2017-like sweep to give a message to the opponents and political pundits that Modi is favourite to win for the third successive term in 2024.

The main opposition – Indian National Congress – has slammed the BJP saying by putting the Hindus first, it was discriminating against the Muslims and increasing possibilities of violence.

Modi, however, has gone on praising Adityanath and his government saying they have done unparalleled work in the economic and social spheres that have proved beneficial for all citizens.

Jamal Siddiqui, head of the saffron party’s minority commission, said the BJP was working to raise the number of minority candidates in Uttar Pradesh and four other states that are going to polls next month.

“I hope the minority community will participate both in elections and in government,” he told Reuters. “The Modi government has protected religious sites for all religions. Now, instead of being afraid of saffron, Muslims are coming closer,” he added.

He also said the Muslims’ suspicion of the BJP in Mathura has been fuelled by misleading claims from the opposition parties.

Mathura, which is located some 150 kilometres south of New Delhi, is believed to be the birthplace of Krishna, a prominent Hindu deity.

A temple located on site of his birth was destroyed and replaced by a mosque, known as the Shahi Eidgah, in the 17th century when the Mughals were in power. A Hindu temple complex, which was built in the 1950s, now backs on to the mosque.

An agreement was brokered in the late 1960s to settle the use of the land and the two structures stood like “two sisters” until legal action to demolish the mosque began in 2020, Z Hassan, president of the trust that runs the Eidgah, told the news outlet.

“I have been here for 55 years. I have not felt tension between Hindus and Muslims,” he said. “Only in the last few years this idea has come that there are two communities,” he added.

The case was brought to a local court by several Hindu priests who claim the 1968 agreement was fraudulent.

“This land is very important to us,” Vishnu Jain, the lawyer acting for the petitioners, said. “I don’t believe in any kind of dialogue. There is only one compromise which can happen – that they will be out of this property.”

Both sides expect the case to go on for a long time.

Adityanath and many other BJP leaders took up the local dispute during the election campaigning this year.

The chief minister told a rally in December that work on constructing a temple in Mathura, along the lines of a similar development in Ayodhya, was “in progress”.

Ayodhya, which is also located in Uttar Pradesh, was the scene of communal violence in 1992 and 1993 in which more than 2,000 people died, after a mob razed the 16th century Babri Masjid mosque that many Hindus strongly believe was on the birthplace of Lord Rama – another important deity.

A court ruling allowing the construction of a temple on the controversial site in Ayodhya was a major campaign issue in the 2019 general election, when the BJP increased its majority in the parliament.