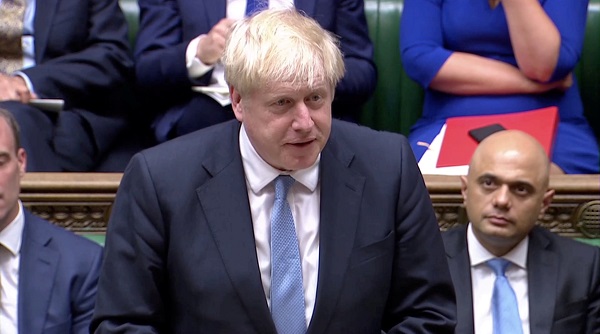 BORIS JOHNSON has appointed three Indian-origin leaders, including Priti Patel as Home Secretary, in his top ministerial team in what has been dubbed as Britain’s most diverse Cabinet, after he took over as the new prime minister with a pledge that the UK will leave the EU on October 31, “no ifs or buts.”

Hours after Johnson was appointed by the Queen as Britain’s new prime minister, he named Patel Home Secretary, Alok Sharma as the International Development Secretary and Rishi Sunak as the Chief Secretary to the Treasury.

They attended their first Cabinet meeting at 10 Downing Street on Thursday morning, on the way to which Sunak declared the new UK government was “toughening up”.

“We will restore trust in our democracy and we are going to fulfil the repeated promises of Parliament to the people and come out of the EU on October 31, no ifs or buts,” Johnson had said on Wednesday (24) in his first speech as prime minister.

His fellow pro-Brexit campaigner Patel will now be in charge of the UK’s security, immigration and visa policies.

The 47-year-old has vowed to fight the “scourge of crime” and will be in the hot seat to fulfil some of her past promises of a fairer post-Brexit visa regime for everyone around the world, free of the freedom of movement norms imposed by the European Union (EU).

“The pressures being put on our services by immigration from the EU has meant that tough limits have been put in place on immigration from outside the EU,” she said during her time as one of the prominent leaders of the Vote Leave campaign in the lead up to the June 2016 referendum in favour of Brexit.

Explaining further, she said that “this means that our relatives struggle to get visas to come to the UK for family celebrations, restaurants cannot employ skilled chefs from abroad, our temples cannot bring in priests, and we cannot bring people in for business, cultural or sporting events – as well as the thousands of talented professionals like doctors, teachers and engineers,” she said.

Fellow Brexiteer Sunak had also issued similar open letters in favour of fairer visa norms for everyone in the world.

The 39-year-old Conservative Party MP, who is married to Infosys co-founder Narayana Murthy’s daughter Akshata, is an MBA graduate and investment expert who takes charge of one of the most important jobs in the UK Treasury, serving under the new Chancellor, Sajid Javid.

The UK-born son of a pharmacist mother and a National Health Service (NHS) general practitioner father is an Oxford University and Stanford graduate. He co-founded a GBP 1-billion global investment firm and specialised in investing in small British businesses before his entry to the British Parliament in the 2015 general election.

Since his re-election in the 2017 snap election called by Theresa May, Sunak has long been considered a rising star as he took over junior ministerial roles and was widely tipped for a promotion in the Johnson Cabinet.

“From working in my mum’s tiny chemist shop to my experience building large businesses, I have seen how we should support free enterprise and innovation to ensure Britain has a stronger future,” Sunak had said during the Brexit referendum.

He strongly believes that small businesses in the UK would flourish as a result of Brexit as the “vast majority of British businesses (94 per cent) don’t have anything to do with the EU; but they are still subject to all EU law”.

India-born Alok Sharma backed Johnson in the Conservative Party leadership contest as the leader best placed to launch a “coherent unambiguous plan to deliver Brexit and take us out of the European Union”.

The 51-year-old Conservative Party MP who was serving as employment minister has been promoted to a full-fledged Cabinet post in the Department for International Development (DfID), where he will be in charge of the UK’s aid budget and partnerships.

“We will work across the whole of government to deliver Brexit and make sure UK aid is tackling global challenges that affect us all, such as climate change, disease and humanitarian disasters,” said Sharma, in reference to his new job.

“I am committed to transforming the lives of the world’s poorest and most vulnerable people, giving them access to quality education and jobs, while promoting Britain’s economic, security and foreign interests,” he added.

The Cabinet, which also includes Pakistani-origin Javid in the top job of Chancellor, has more ethnic minority key ministers than any previous UK ministerial team.

“It proves that in modern Britain you can reach the highest office regardless of your background or origins. It also signals the different approach which Boris Johnson is expected to take towards immigration – welcoming the best and brightest talent to the UK – based on the needs of the economy rather than setting arbitrary targets,” said Indian-origin peer Lord Jitesh Gadhia.