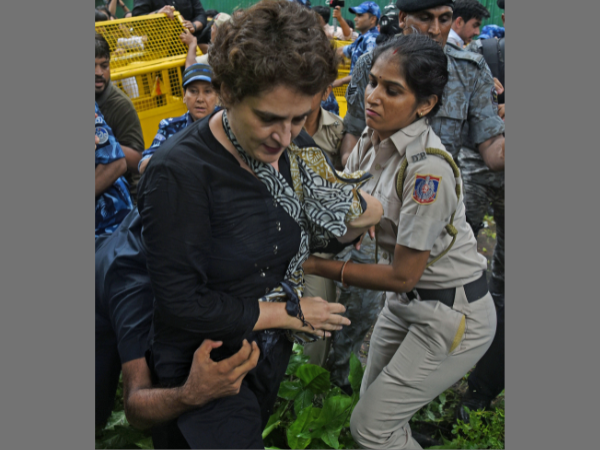 Congress leader Priyanka Gandhi Vadra being detained outside AICC HQ where she had joined other leaders and supporters of the party during a nationwide protest against unemployment and inflation, in New Delhi on Friday, August 5, 2022. (ANI Photo/Shrikant Singh)

In dramatic scenes on the streets in New Delhi on Friday (5), police personnel were seen detaining Indian National Congress leader Priyanka Gandhi Vadra, daughter of the party’s interim president Sonia Gandhi, along with other leaders of the party who were protesting against the Narendra Modi government over a range of issues, related to price rise, Goods and Services Tax on essential items and unemployment.

The 50-year-old Vadra, who is the general secretary of the All India Congress Committee, staged a ‘dharna’ (sit-in protest) on the streets, defying the police officers around her. Dressed in black like other leaders of the opposition party, including brother and former party president Rahul Gandhi, she was also seen climbing over police barricades to reach the spot where she protested. However, police officers later dragged her away citing denial of permission over law-and-order situation.

Policewomen were seen trying to persuade her to end the protest before they forced her out.

Congress leader DK Shivakumar from the southern state of Karnataka slammed the use of force against Vadra, saying in a tweet “Strongly condemn the use of force to detain Smt. @PriyankaGandhi while she was protesting peacefully against prise rise. We call ourselves a democracy but our leaders are not allowed to be the voice of public against govt policies that are breaking the backs of common people.”

Strongly condemn the use of force to detain Smt. @PriyankaGandhi while she was protesting peacefully against prise rise.

We call ourselves a democracy but our leaders are not allowed to be the voice of public against govt policies that are breaking the backs of common people. pic.twitter.com/9KLI7rm7Pl

The local administration had announced prohibitory orders to disallow the protest and large gatherings in parts of Delhi ahead of the opposition party’s protest march. Rahul Gandhi, who was also detained for a brief time, said ahead of the protest that India was witnessing the “death of democracy”.

“What India has built brick by brick, starting almost a century ago, is being destroyed in front of your eyes. Anybody who stands against this idea of onset of dictatorship is viciously attacked, jailed, arrested and beaten up,” he said.

The BJP retorted with a jibe, asking if there’s democracy within the Congress, calling it a “dynastic” party.

Before starting the protest, Congress MPs led by party chief Sonia Gandhi and Rahul Gandhi wore black clothes to Parliament. Proceedings were adjourned as Congress members created an uproar over the alleged misuse of probe agencies and the government “ignoring people’s issues”.

Comments
A statement from the party said its Lok Sabha and Rajya Sabha members would hold a “Chalo Rashtrapati Bhavan” march from Parliament. Congress Working Committee (CWC) members and other senior leaders planned to take part in “PM House gherao”.