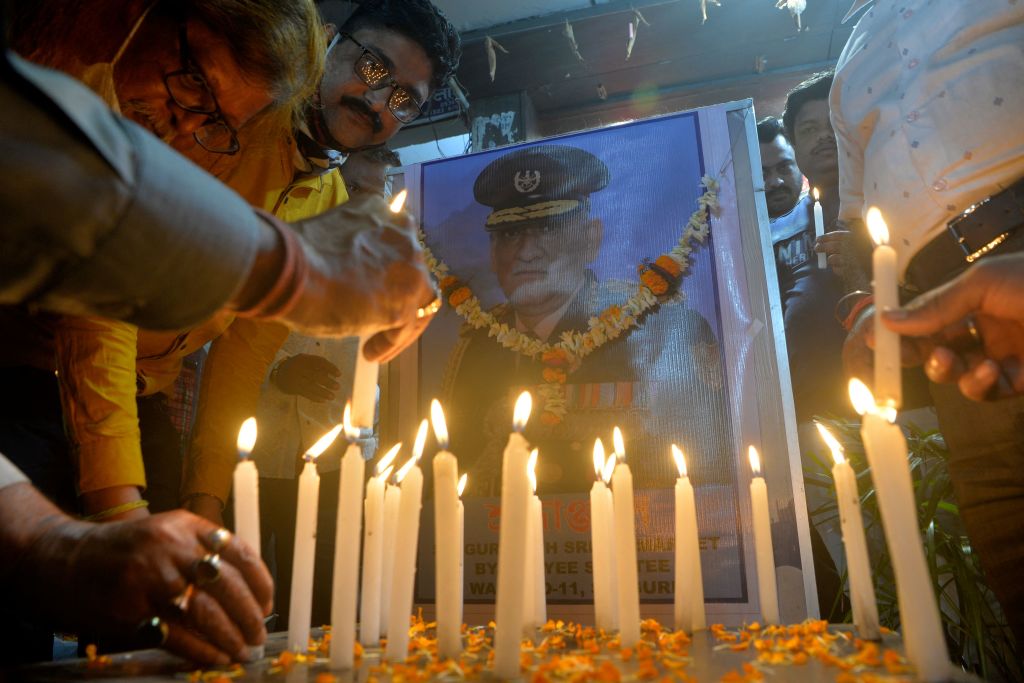 People light candles to pay tribute to India’s late first defense chief general Bipin Rawat, who was killed with others in a helicopter crash on December 8, at a market area in Siliguri in the eastern Indian state of West Bengal on December 9, 2021. (Photo by DIPTENDU DUTTA/AFP via Getty Images)

AT least eight people have been arrested and two booked in several states of India over social media posts on the death of the country’s first chief of defence staff general Bipin Rawat in a military helicopter crash on December 8. Rawat’s wife Madhulika and 11 other personnel were also killed in the accident that left India shocked.

One person was also suspended from a government job due to a controversial post.

The most number of arrests took place in Rajasthan – three. The first one took place hours after the crash while the other two happened on Saturday (11). The three arrested are Jawaad Khan, 21, in Tonk district, Manish Kumar Meena, 28, and Jeevanlal Ninama, 25, from Pratapgarh district. The police said Khan’s remarks were “inappropriate” while those made by Meena and Ninama were “offensive” and “hurt public sentiments”.

“Khan has been arrested under Section 505 (2) (making statements with intent to cause public mischief, or alarm to public) and has been sent to judicial custody,” Chandra Singh, circle officer, Tonk, was quoted as saying by The Indian Express.

A first information report was registered on a complaint filed by a police constable. It said Khan’s remarks promoted communal enmity.

Two persons were arrested in Gujarat – on December 9 and 10. One among them, Feroz Diwan, was arrested by Bharuch Special Operations Group on Friday (9) for alleged “objectionable” remarks made in a Facebook post. He later deleted the post and was released on bail on Saturday (11).

Diwan is facing charges under sections 153 (giving provocation with an intention to cause riot), 153 (B) (imputations prejudicial to national integration), 504 (intentional insult to provoke breach of peace), 505 (1B) (intent to incite and create fear among the public) and Information Technology Act 84 (c) (punishment for an attempt to commit offence) of the Indian Penal Code (IPC).

The other person held in Gujarat is Shiva Bhai Ahir, 44, who made a post about the crash and is facing charges under sections 153A (enmity between different groups), 505(1) (publishing and circulating rumours) and 295A (for deliberate and malicious acts, intended to outrage feelings) of the IPC.

In the central Indian state of Madhya Pradesh, a tribal youth leader named Durgesh Vaskale was arrested on Saturday (11) for allegedly objectionable remarks on Facebook that were removed later. A BJP lawmaker Ram Dangore complained against Vaskale, who is a member of Jai Adivasi Yuva Shakti, to the police and said he should be tried under the National Security Act. Vaskale was subsequently arrested under IPC sections 297 (trespassing to wound religious feelings), 153A and 153B. He was accused of rejoicing over the “martyrdom” of Rawat and the others, and trying to disturb social harmony.

In Tamil Nadu, Maridhas, a popular YouTuber backed by the BJP, was arrested on Saturday for posting a tweet that hinted at a conspiracy behind the crash which happened in the southern state and accused the ruling DMK of encouraging separatist politics. While he deleted one of those tweets, another posted by him accused followers of the DMK and its ally Dravida Kazhagam of mocking the death of Rawat and others. He was arrested despite the BJP workers protesting in his support.

In Jammu and Kashmir, a shopkeeper named Mohammed A Shafi was arrested. He was accused of forwarding a Facebook post which allegedly originated in Pakistan in which “derogatory” remarks were made against the late general.

The police said they were also planning to initiate action against a contractual lecturer in Pulwama, Jammu and Kashmir, after a complaint was made against him by some right-wing Hindu organisations in Udhampur over “derogatory” posts.

Jammu and Kashmir Bank also suspended one of its women staff members pending disciplinary proceedings for allegedly reacting to a news report on the crash with a laughing emoji.

The police in Karnataka registered cases against two persons in Mangaluru for alleged derogatory messages over the chief of defence staff’s death.

“Every Indian should strongly condemn this act… against the man who led the armed forces to defend the country,” he said.