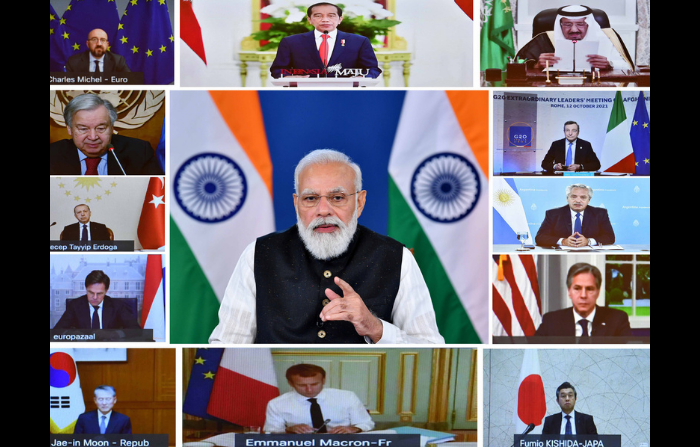 INDIAN prime minister Narendra Modi on Tuesday (12) emphasised at the G20 Extraordinary Leaders’ Summit on preventing Afghanistan from becoming a source of radicalisation and terrorism. The summit in which he took part virtually was hosted by his Italian counterpart Mario Draghi.

Modi said on the occasion that a “unified international response based on UNSC Resolution 2593 is necessary to improve the situation in Afghanistan”.

The prime minister later said on Twitter that he called for “urgent and unhindered humanitarian assistance to Afghan citizens”.

India has been raising concerns over Afghanistan after the Taliban returned to power in Kabul in August as the US-led western troops decided to withdraw from the war-torn nation after almost 20 years of occupation. New Delhi fears the Taliban takeover would encourage anti-India terror groups based in Pakistan to use Afghanistan’s soil to promote their agenda.

Modi also called for an inclusive administration in Kabul that would include women and minorities “in order to preserve the socio-economic gains of the last 20 years and to restrict the spread of radical ideology,” a statement by the Indian ministry of external affairs read.

The UNSC (UN Security Council) Resolution 2593 — issued on August 30 under India’s month-long presidency of the body — emphasises that Afghanistan must not allow its soil to be used for terror-linked activities.

Modi also “emphasized on the need to enhance our joint fight against the nexus of radicalization, terrorism and the smuggling of drugs and arms in the region,” the ministry’s statement release stated.

Apart from Modi, several other world leaders also attended the conference which focused on aid needs, security and ways ensuring safe passage abroad for thousands of western-allied Afghans who are still stranded in that country.

German chancellor Angela Merkel said her country is not yet prepared to recognise the Taliban as Afghanistan’s government since it has not met the inclusiveness standards demanded of it. She added that Germany will provide aid to Afghanistan this year.