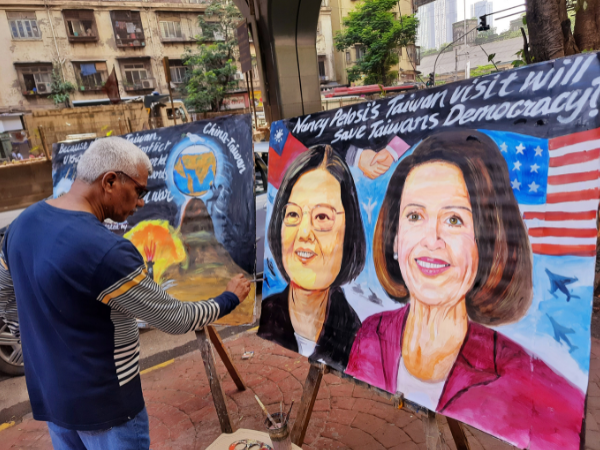 An artist of Gurukul School of Art draws a painting of US House Speaker Nancy Pelosi and Taiwanese President Tsai Ing-wen over hoping a peaceful resolution between ongoing China and Taiwan situation, in Mumbai on Wednesday, August 3, 2022. (ANI Photo)

Amid tension between the US and China over US House Speaker Nancy Pelosi’s visit to Taiwan, a top official who led the missile development team of the self-governed island country was found dead in a hotel room, media reported on Saturday (6).

The official, Ou Yang Li-hsing, the deputy head of Taiwan defence ministry’s research and development unit was found dead on Saturday morning in a hotel room, The Jerusalem Post reported citing Taiwan’s official Central News Agency. The 57-year-old deputy chief of the military-owned National Chung-Shan Institute of Science and Technology (NCSIST) was on a business trip to Pingtung in Southern Taiwan in of Pingtung, according to CNA, which said the cause of his death is being investigated.

According to the Jerusalem Post, authorities are currently saying the official likely died of a heart attack and the hotel room showed no sign of any “intrusion”. His family said he had a history of heart disease and had a cardiac stent.

The state-run NCSIST that develops and manufactures weapons in Taiwan, is currently conducting a series of live-fire missile tests at Jiupeng military base in the south of the country, according to CNA as cited by the Jerusalem Post.

Earlier this week, US House or Representatives Speaker visited Taiwan sparking several debates across the globe as China strongly opposed military cooperation between Washington and Taipei and warned of longstanding, grave consequences for not just the self-governed island but for other countries as well.

Since her tour in the island nation, China has been conducting the largest-ever military exercises in the Taiwan Strait, including launching live missiles it claims as part of its sovereign territory.

China has continued to carry out military drills and exercises in the vicinity of Taiwan for a second day, following the visit of US politician Nancy Pelosi to the islands.

More recent, multiple Chinese planes and ships were detected around Taiwan Strait, simulating an attack on its main island, the Defence Ministry said on Saturday adding that some of them have crossed the median line.

China on Friday (5) said it would sanction Pelosi in response to her “vicious” and “provocative” actions in visiting Taiwan.

“If they really worry about the regional peace and stability, why didn’t they stand out earlier to prevent Pelosi from paying the provocative visit to Taiwan? Why didn’t they take a different move at the beginning? On issues regarding China’s sovereignty and territorial integrity, China’s countermeasures are justified, necessary, appropriate and not at all excessive,” said the spokeswoman.
Back in April, Pelosi’s visit to Taiwan had been postponed after she tested positive for Covid-19.