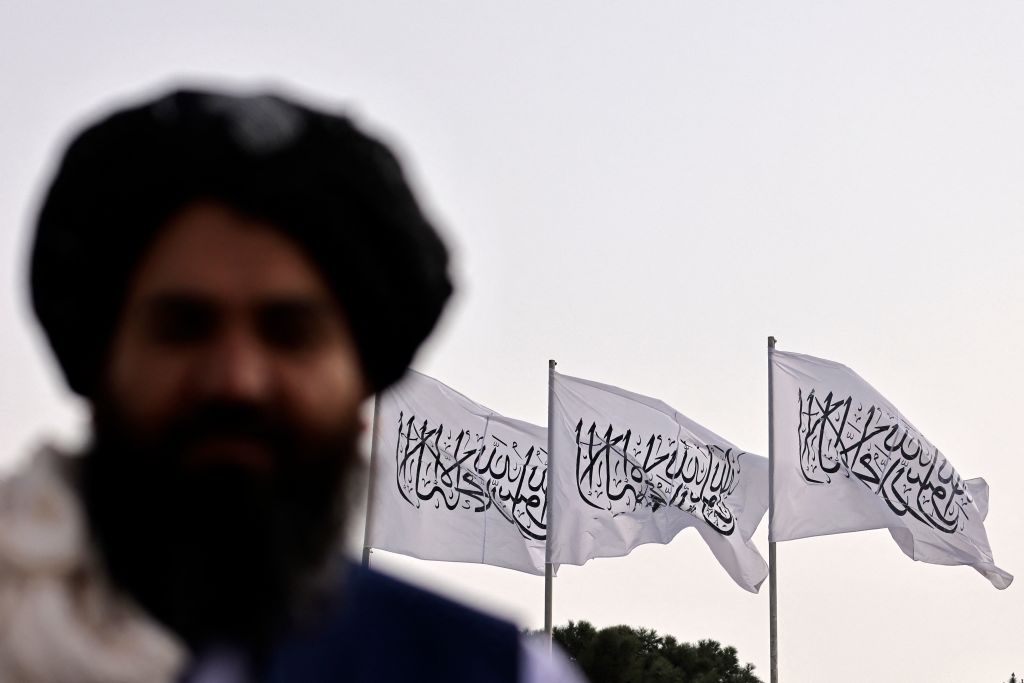 A Taliban fighter pictured against the backdrop of Taliban flags installed at the Hamid Karzai International Airport in Kabul, Afghanistan, on September 11, 2021. (Photo by KARIM SAHIB/AFP via Getty Images)

AT a time when India’s security establishment has repeatedly expressed concerns over the situation in Afghanistan under the Taliban, it has been reported that the civil aviation authority of Afghanistan has urged India’s Directorate General of Civil Aviation (DGCA) in written to give permission to the country’s national carriers to resume scheduled commercial flights between New Delhi and Kabul.

According to reports, the communication was made on September 7 on a letterhead of the “Islamic Republic of Afghanistan”.

Reports cited sources saying that this is the first known official communication from a government entity in Kabul to their counterpart in New Delhi since the Taliban stormed back to power in Afghanistan in mid-August.

India does not extend an official recognition to the Taliban regime even though its ambassador to Qatar met a senior Taliban leader in Doha last month.

All commercial flights to and from Afghanistan were halted on August 15 after the Taliban recaptured power in Kabul hours after Ashraf Ghani, the west-backed president, fled. The Taliban returned to power in Kabul in almost no time, overrunning nearly all provinces of the country in less than 10 days.

The airport in Kabul saw hurried evacuation flights carried out by various countries and it stopped after the last American soldier left Afghan soil on August 31.

Coming back to the letter that was sent from Afghanistan to India, it is signed by the Taliban government’s acting civil aviation minister Alhaj Hameedullah Akhunzada. He is one of the 14 members of the cabinet who are listed under the United Nations Security Council’s sanctions regime. He was in charge of Ariana Airlines during the Taliban’s previous regime.

“As you are well informed that recently the Kabul Airport was damaged and dysfunctional by American troops before their withdrawal. By technical assistance of our Qatar Brother, the Airport became operational once again and a NOTAM in this regard issued on 6 September 2021,” Akhunzada wrote to Arun Kumar, the director general of the DGCA.

“The intention of this letter is to keep the smooth passenger movement between the two countries based on the signed MoU and our National Carriers (Ariana Afghan Airline & Kam Air) aimed to commence their scheduled flights. Therefore, Afghanistan Civil aviation authority requests you to facilitate their commercial flights,” he said, adding, “The Civil Aviation of Islamic Emirate of Afghanistan avails its highest assurance.”

Saleem Rahimi, vice president (commercial), Ariana Airlines, confirmed to The Wire news outlet that the letter has indeed been sent. “Yes, a letter was sent to India about restarting the flights,” he said, adding that there has been no response so far,” he said.

Presently, regular international flights to and from Afghanistan are only being operated from Iran and Pakistan, two of its neighbours.

Besides, there have been special flights from the UAE, Qatar, Turkey and Ukraine.