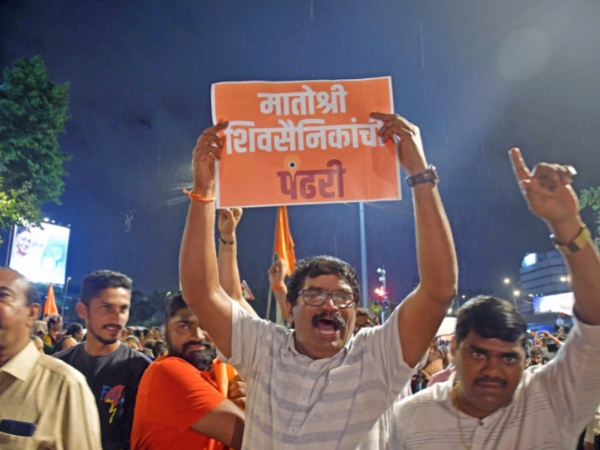 A Shiv Sena supporter holding a placard and others gather outside Maharashtra chief minister Uddhav Thackeray’s residence ‘Matoshree’ to express his support in Mumbai on Wednesday, June 22, 2022. (ANI Photo)

AFTER Shiv Sena leader Sanjay Raut said that his party is ready to exit the Maha Vikas Aghadi (MVA) or Maharashtra Development Front) government if the rebel MLAs are willing, the Indian National Congress on Thursday (23) called a meeting of its leaders in the evening.

According to sources, Congress is unhappy with the statement of the Sena leader and convened the meeting at the Sahyadri guest house in this regard.

Speaking to Asian News International, Maharashtra Congress chief Nana Patole said that the party is with Sena to stop the Bharatiya Janata Party (BJP) from coming to power in the state.

“We’re with them (Shiv Sena) to stop the BJP from coming to power. This game is happening due to ED…Congress is ready for the floor test. We’re with MVA and will remain. If they (Shiv Sena) want to form an alliance with anyone, we don’t have a problem,” he said.

Earlier today, Raut said, “MLAs should not communicate from Guwahati, they should come back to Mumbai and discuss all this with CM. We are ready to consider exiting out of MVA if this is the will of all MLAs, but for that, they have to come here and discuss it with chief minister Uddhav Thackeray”.

Raut further claimed that 21 legislators in Guwahati have contacted the Sena and when they return to Mumbai, they will be with the party.

“Uddhav Thackeray will come back to Varsha very soon. 21 MLAs in Guwahati have contacted us and when they return to Mumbai, they will be with us,” he added.

Jayant Patil, a leader of the Nationalist Congress Party, another member of the MVA coalition, tweeted, “Maharashtra Vikas Aghadi is a government established for the development and welfare of Maharashtra. We will stand firmly with Uddhavji Thackeray till the end.”

Meanwhile, Pramod Sawant, the BJP chief minister of Goa, said that former chief minister Devendra Fadnavis and the central leaders are keeping an eye on the developments in the state.

“Our Maharashtra leader Devendra Fadnavis and all our central leaders are keeping an eye on it. He (Devendra Fadanvis) is capable to take a decision in the interest of the state,” he told ANI.

Rebel Shiv Sena leader Eknath Shinde on Thursday tweeted a letter addressed to Chief Minister Uddhav Thackeray, and captioned it “This is the sentiment of MLAs”.

According to the letter, the Shiv Sena leaders don’t have access to the chief minister’s residence.

“CM never used to be in the Secretariat, instead, he used to be in ‘Matoshree’ (Thackeray residence). We used to call people around the CM but they never used to attend our calls. We were fed up with all these things and persuaded Eknath Shinde to take this step,” the MLA wrote in the letter.

“It was nice to see people are being allowed inside your Bungalow but these doors were closed for the elected MLAs. We came with our problems in our constituencies and other work, but were made to remain outside for hours together. On the other hand,Eknath Shinde was accessible. We stood at the gates of Varsha for hours. It was only Eknath Shinde who supported us,” the letter further added.

The MLAs further stated in a letter that they were stopped from going to Ayodhya during Aaditya Thackeray’s visit to Ayodhya.

“While we weren’t able to meet the CM, people from our ‘real opposition’– the Congress and the NCP used to get opportunities to meet him and even funds were given to them related to work in their constituencies. When Hindutva and Ram Mandir are crucial issues for the party, then why did the party stop us from visiting Ayodhya? MLAs were called and were stopped from going to Ayodhya during Aaditya Thackeray’s visit to Ayodhya.”

Notably, a total of 42 Maharashtra MLAs are present with Sena leader Shinde while only 13 are with Thackeray.