Gautam Gambhir’s Celebrity Status Will Go Against Him: Atishi 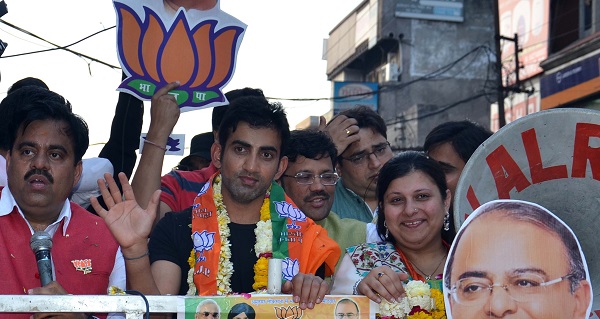 According to Atishi, the third place in this election is reserved for the Congress and its role is no more than that of a “vote-cutting” party (Photo: NARINDER NANU/AFP/Getty Images).

CLAIMING that her BJP rival Gautam Gambhir is proving to be a “novice” whose celebrity status will go against him, AAP’s East Delhi candidate Atishi says people might want to see stars but want their representatives to be available to them in their everyday lives.

The Oxford graduate, who believes the BJP is her main opponent and the Congress is number three in the electoral race, said people won’t vote for the former cricketer because they know he will anyway get disqualified after the elections.

The 37-year-old, who doesn’t use her second name Marlena but has not dropped it officially, said celebrities have a disadvantage. People will come to see them but an MP is someone they want in their everyday lives, she explained.

“Everyone knows Gautam Gambhir is a star who is going to be in Bombay, London and Johannesburg. He is not going to be available to attend to people of his constituency,” she said.     ‘

The AAP candidate is locked in a three-way fight with Gambhir and Congress’ Arvinder Singh Lovely in the elections on May 12, the penultimate round of the seven-phase polls.

According to Atishi, the third place in this election is reserved for the Congress and its role is no more than that of a “vote-cutting” party.

Calling the BJP her main competition, she said an analysis of previous elections will show the Congress has been third every time.

“In this election too, we will see a repeat of that… in 2015, the Congress lost its deposits on 90 per cent of the seats. It is going to get repeated. No one wants to vote for a losing candidate. I met some traditional Congress supporters but they said this time they will vote for the Aam Aadmi Party as the Congress is not even in the fight,” Atishi asserted.

On the Opposition targeting her for her surname, Atishi said it is because they have nothing else against her.

“The Opposition has nothing against me so they are trying to pull a rabbit out of a hat. A Congress MLA is saying I am a Jew. This is something that can be verified within minutes. These things are indicators the Congress is now getting desperate. In 2015, the same thing happened when the BJP and Congress launched ugly attacks against Kejriwal. It is a sign of their desperation,” she said.

“There is something that is an intelligent attack but this one is baseless and it will not stick,” she added.

In Atishi’s view, her biggest strength is the work she has done in the education sector.

“About 2,50,000 students stay in East Delhi. These people have experienced in their own substantive way what their vote to the AAP has done… and when they voted four years ago for the Aam Aadmi Party how it changed the lives of their children.  I think that is something very powerful,” she said.

Discussing her vision for the East Delhi constituency, Atishi said the main focus this time is the fight for full statehood because many problems faced by the citizens of East Delhi are related to the structure of governance.

“For example, safety and security in East Delhi is a very big concern and this is an across the class concern. It isn’t an issue that one segment faces and another does not… But because Delhi Police comes under the Central government there are virtually no steps being taken,” she said.

Education, she added, is another major concern as it is one of the most neglected areas.

“We have tried to rectify that as far as schools go. But higher education still does not come under Delhi government so improving higher education is also related to the issue of full statehood,” she said.

She listed affordable housing as an important concern for the area.

How will she address the issues of the people till full statehood is achieved?

“MPs are members in DDA, they can improve land allotment in schools, colleges, hospitals. MPs head the district wise committee on monitoring how government bodies function. So incrementally MPs on their own can improve the situation,” she added.