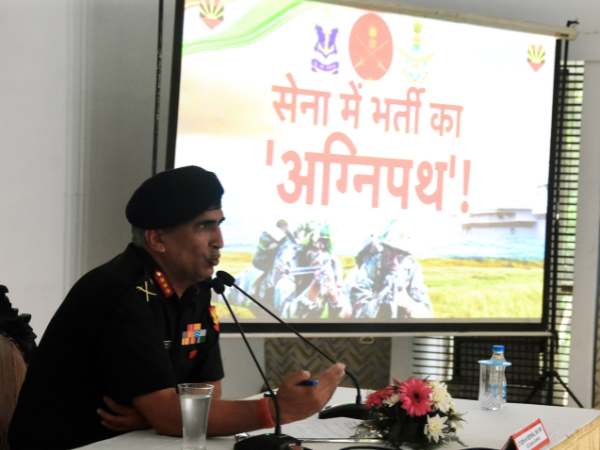 THE Narendra Modi government of India on Tuesday (14) unveiled a radical armed forces recruitment plan called ‘Agnipath’. It tasked defence minister Rajnath Singh and the chiefs of the three services to deal with the criticism that the new scheme will undermine the military’s professionalism and spirit and lead to a potential militarisation of the civil society.

Just days after the scheme was unveiled, India was witnessing violent protests in various parts against it with those aspiring to serve in the forces saying that it was not fair. India’s opposition parties also slammed the Modi government over the same saying it was not doing justice with the country’s innumerable job-seekers.

ALSO READ: Modi’s own MP not okay with ‘Agnipath’ scheme for armed forces

What exactly is ‘Agnipath’ scheme?

The plan entails a recruitment process for individuals with ranks below those of officers and aims to deploy younger and fitter troops on the borders. The tenure of the service will be four years and the plan intends to give the three services a more youthful image.

Who can apply under ‘Agnipath’?

Men and women aged between 17-and-half and 21 years will be recruited for the armed forces under the ‘Agnipath’ scheme. “After four years, ‘Agniveers’ (those recruited under the scheme) will be able to apply voluntarily for the regular cadre. Based on merit, organisation requirement, up to 25 percent shall be selected from that batch,” a top official of Indua’s department of military affairs said. “We will provide an opportunity to the youth to serve the nation for a short and long duration, as ‘Agniveers’. We are giving youth a chance for both long and short duration military service,” he added.

All the three services will be enrolled via a centralised online system with specific rallies and campus interviews held by recognized technical colleges such as the Industrial Training Institutes and the National Skills Qualifications Framework, etc.
Enrolment will be on an ‘All India All Class’ basis, with eligible ages ranging from 17.5 to 21 years. The ‘Agniveers’ will have to meet the medical requirements for military enlistment as they apply to their specific categories/trades. Their educational credentials will continue to be popular for enrolment in a variety of categories: Qualifying the 10th standard is the minimum educational requirement for becoming a general duty soldier.

The first-year salary package is Rs 4.76 lakh with an increase to Rs 6.92 lakh in the fourth year. There is also a non-contributory insurance cover worth Rs 48 lakh. If the individuals receive an ‘Agniveer’ skill certificate, it will help them get post-release employment.

After four years of service, 25 per cent of the ‘Agniveers’ will be retained in the regular cadre based on their merit, willingness, and medical fitness. They will thereafter serve another full term of 15 years.

While the remaining 75 per cent of ‘Agniveers’ will be demobilised, they will be given an exit or ‘Seva Nidhi’ package worth Rs 11-12 lakh, which will be partially funded by their monthly contributions.

Advantages of the scheme

Girls under the specified age limit are also eligible for ‘Agnipath’ admission, though there is no such reservation for women under this scheme. Admiral R Hari Kumar of the Indian Navy said women will be selected through the scheme, and the navy, which currently has only female officers, will have sailors.