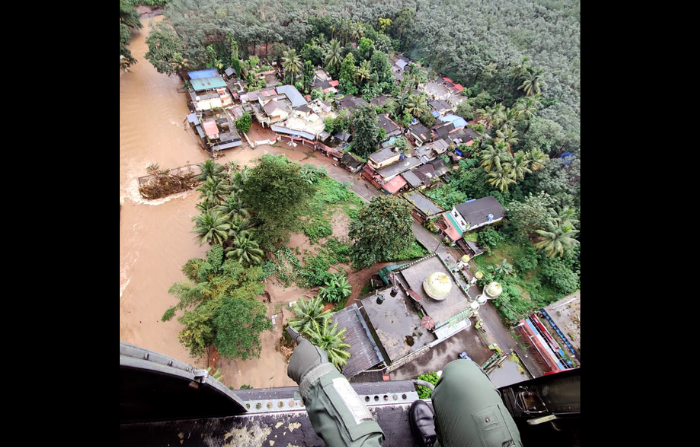 A scene from the flood-affected Indian state of Kerala. (ANI Photo)

THE devastating landslides and floods in the southern Indian state of Kerala failed to stop a wedding-bound couple who sailed nearly 500 metres across submerged streets in a massive cooking pot to reach the venue which is a local temple. The incident happened in Thakazhi near the city of Alappuzha in Alappuzha district on Monday (18).

Kerala has been battered by torrential rain since Friday (15) which has caused many deaths and injuries. Many have also gone missing and properties have been destroyed. The Indian armed forces have called in to help in the rescue operations.

The area in Alappuzha where the couple’s marriage took place was completely inundated. Yet, the bride and the groom – Aishwarya and Rahul – defied all challenges to reach the wedding venue.

It's been tough for many. But then there is also some wedding cheer, amid it! This couple – Akaash & Aishwarya, use a huge cooking vessel to wade through flood waters in Alappuzha district,to get to their own wedding venue. Wishing them all the happiness, and easy sail 🙂 #Kerala pic.twitter.com/XnvglwazRn

Usually, brides and grooms in Kerala reach the wedding venue in vehicles but it was not possible for Aishwarya and Rahul. They came on a traditional rice-cooking copper vessel and arrived as per the planned ‘muhurtam’ (auspicious time for a wedding) to become life partners.

A handful of relatives were present on the occasion. The marriage hall was flooded but the stage where the marriage ceremony took place in the presence of the temple priest was spared.

“We were not scared to travel in the vessel,” Raul was quoted as saying by Indo-Asian News Service. Aishwarya said, “We all are happy that the wedding took place at the planned auspicious time.”

A relative, who organised the vessel trip, said, “Some areas near the temple were almost submerged but we managed to bring both the bride and the groom on time.”
Both Rahul and Aishwarya, who belong to the same locality, are reportedly health workers.

More than 30 people have reportedly died in the floods and landslides in Kerala with the state government saying it has set up over 100 relief camps. The current natural disaster has brought alive the memory of the 2018 floods in which 500 people across Kerala were killed.